From Tuesday 1st November Dundonald Caravan Park will operate on Aire de Service until Tuesday 14th March 2023 with no access to the Amenities Block (showers, toilets, kitchen etc.) It will become a fully serviced site again on Wednesday 15th March 2023.

Did you find what you were looking for on our website?

Dundonald Touring Caravan Park is recognised by both Tourism Northern Ireland and the AA for the quality and service of its Park.

The British Graded Holiday Parks Scheme was devised jointly by the national tourist boards of Northern Ireland, England, Scotland and Wales in association with the British Holiday and Home Parks Association and the National Caravan Council.

Each caravan park is awarded a star grade which highlights to guests the level of quality of the park.

Under the scheme, Dundonald Touring Caravan Park has been awarded a Four Star grade out of five.

As part of the AA Caravan and Camping Scheme, caravan parks and campsites are inspected and rated from one to five black pennants based following an assessment on the quality and variety of facilities the park/site offers – including customer care and hospitality, amenities and landscaping – based on the inspector’s experience opinion. 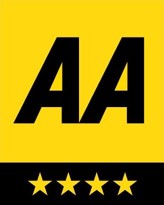 Parks/sites are each given a percentage score between 50 and 100, which indicates the relative quality of parks with the same pennant rating. The top level is classified as a 'Five Pennant Premier Park'.

Under the scheme, Dundonald Touring Caravan Park has been awarded a Four Pennant grade out of five.